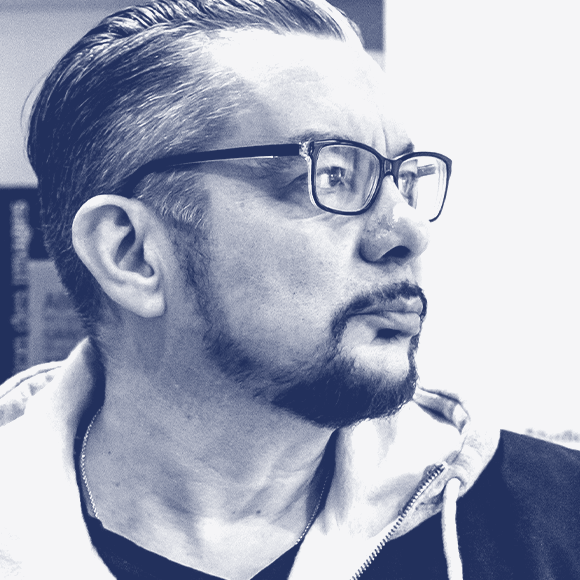 Neville Brody is synonymous with ‘visual language’. A seminal designer, typographer and brand strategist, he is acclaimed globally for a body of work that spans three decades. He is renowned for pushing creative boundaries in all that he does.

This spirit of exploration and pursuit of excellence informs the approach of Brody Associates, the collaborative creative agency he founded in 2014 and which specialises in digital design, typography and identity.

Brody’s prolific contribution to design has been acknowledged in a raft of honours, including his investiture in 2011 as a Royal Designer for Industry – the UK’s highest design accolade – and a Special Commendation in the Prince Philip Designer’s Prize in 2010.

And the recognition is international. One of his typefaces, Blur – designed in 1991 – is in the prestigious permanent collection of the Museum of Modern Art in New York.

Brody is equally passionate about creative education and was Dean of the School of Communication at London’s Royal College of Art from 2011 to 2018, where he continues as Professor of Visual Communication. He used his term as President of Design & Art Direction from 2012-13 to raise global awareness of the dire future facing creative education and continues to champion the need for change.

Despite such commitments, Brody remains hands-on as a designer. He came to prominence early in his career, working on graduation from the London College of Printing (now London College of Communication) in the late 1970s on album sleeves for Punk bands at Rocking Russian and Stiff Records. His work as art director of magazines such The Face and Arena in the 1980s won him international fame.

Though his portfolio includes British identities for the likes of Somerset House and the Royal College of Art in London, the design of The Times newspaper, typography commissioned by Nike Football for the England shirts for the 2014 World Cup, the design of the BBC website, and the main typeface designs for Channel 4, his work is largely outside the UK. His client base shifted overseas in the 1990s and alongside cultural outliers such as Supreme and Vandals, he currently works with global blue chip companies like Shiseido, Samsung and Nikon in Asia, Christian Dior and Longines in Europe and Mayo Clinic in the USA. He is responsible for the Coca-Cola’s global typeface, their first proprietary font.

Brody actively challenges perceptions of creativity, through his work, but also through the propagation of new ideas. In 1991, for example, his deep understanding of typography led to FUSE, a publication sharing and celebrating radical, experimental typography.  He set up FUSE with Jon Wozencroft, who also collaborated on The Graphic Language of Neville Brody 1 and 2, published in 1982 and 1991 respectively. To celebrate the 20th edition, publisher Taschen released a compendium of all FUSE issues.

And then there is the Anti-Design Festival, staged in London’s Shoreditch in 2011 to explore ideas and new materials across design. Set up by Brody to challenge the contemporary designscape where risk-taking is taboo and experimentation often seen as failure, the show neatly summed up Brody’s approach. For him the thinking and the process behind any design are as engaging and important and the outcome.